Chris Barnard Revisited: My Place in His Legacy 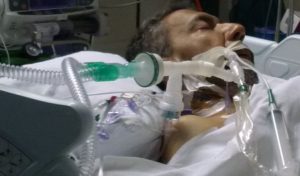 On a Monday morning in August, 2016, South African Wayde van Niekerk became the fastest person on earth across 400 meters of an athletics track, raising whoops of unbridled joy and admiration. I was left considering my own slow, stop-start, breathless perambulation around the life track I’ve been placed on. I had spent the weekend in hospital, after a series of scans and tests that showed I had two clots in my lower body, excess fluid around my right lung and abdomen and a heart ejection rate – the rate at which the heart muscle pumps blood through the body and the likely cause of the excess fluid – of 10%-12%, regarded as “end stage” heart failure.

I had been diagnosed with cardiomyopathy, an enlarged, weakened heart muscle, in 2007 and was on medication since then to manage this. But, I believe bad bouts of viral flu probably caused my heart muscle to deteriorate.

On October 11 last year I received a donor heart in a transplantation at Christiaan Barnard Memorial Hospital in Cape Town.

At the start of my diagnosis of heart failure, I knew absolutely zip, zero, zilch about heart transplantation. But my family and I learned quickly. And I very quickly had to reassess my attitude towards Chris Barnard and his achievement, primarily, in heart transplantation. I wrote on my blog last year that, growing up in the 1960s and ’70s, Professor Barnard’s achievement in performing the first successful transplant of a human heart was the subject also of discussion around our family’s supper table, in classrooms at the local school and among friends when we took breaks from playing soccer in the street. Age was no barrier to entry of the heated, pejorative even, kerbside political discussions among my friends. Even the relentless news feed of his growing celebrity status, the globetrotting, the romancing of women we knew only from Saturday afternoon movie shows on the big screen in the local church hall, made an impact on us.

Clearly, even as our young minds could not completely comprehend the medical, ethical or even political significance of the transplant, Barnard deserved acknowledgment for his scientific achievement. His success was on a par with the later first moon walk by astronaut Neil Armstrong. As biographer Chris Logan wrote: In an age of discovery they – astronauts and surgeons – were all pioneers.

I would never have been a fan of the professor’s. He was, after all, an Afrikaner male in a country ruled by Afrikaner men who made it their life’s mission to legally subjugate black South Africans, like my family, although our apartheid definition and citizenship registration was as “Cape coloured”.

By his own account, Barnard was “absolutely adamant” that his patients came first, that he would never benefit financially or through publicity from their illnesses. On this there is no contradiction by anyone else. It was one of his defining traits.

In a political sense, he was capable of appreciating the hurt which “coloured” people experienced on the wrong side of petty apartheid laws. Even understood the whirlwind of emotions which a so-called “non-white” father would feel being asked to agree to his son’s heart being made available to save the life of a white man. He was not impervious to the depth of such emotion.

Today, I remain at odds with Barnard’s place in our country’s history, conflicted too, perhaps driven by my own individuality.

I remain in awe of his mental acuity, his tenacity, his professional skills, his commitment to his patients, to advancing their health regardless of the colour of their skin, his reaching for excellence and his expectation of that value in others, his desire to extend the bounds of science, his visionary and relentless research efforts to place human heart transplants at the forefront of medical science in the way he did.

Whether I like it or not, I am now part of Barnard’s legacy.

In one of his last pieces of writing, Barnard reflects on the failure of modern medicine. It is a reflection demanded of all of us, but one which we avoid – and the worst culprits are those in our government, politicians, officials, doctors and nurses, but also the profit-driven managers of private sector health services. It is to them, to us all really, to whom he directs these comments:

“It is time for a rethink, a spiritual and moral regeneration, and a realization that in the practice of advancing 20th century medicine, we have negated its primary aim: a sociologically and physically healthy family of nations in which quality, rather than quantity, of life is the primary concern. (In Lanza p109)

“Health is far too serious a matter to be left solely in the hands of the health professionals. The curative approach to health involves heavy expenditure on prestige hospitals. These massive institutions filled with sophisticated equipment are staffed by highly trained personnel whose expensive postgraduate training fits them to carry out costly research, but they are looking for trees while up to their eyes in wood. They provide a disease service rather than a health service; instead of promoting health, they try to displace the disease.”

Chris Barnard Revisited: My Place in His Legacy

2 thoughts on “Chris Barnard Revisited: My Place in His Legacy”