Mother’s Journey From Mourning to Joy 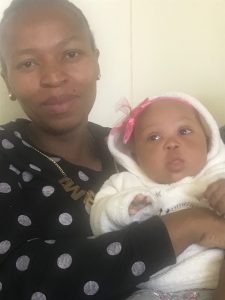 Nomthandazo Rumbu is used to travelling the road with a child suffering from congenital heart disease.

Her daughter, Isemihle, six months-old, was diagnosed shortly after birth by Dr Goosen from Cecilia Makiwane Hospital with two holes in her heart. The holes were closed in an operation in September 2017 at Red Cross Children’s Hospital in Cape Town.

She has already seen her daughter gaining weight, a vast improvement on the first couple of months of her short life.

The Reeston mother was not as fortunate three years ago. Her first-born, aged only nine months, died of an enlarged heart. Rumbu laments the fact that she had access to very little information about CHD at that stage.

“When my first child was ill, I didn’t know anything about heart disease. If I did know…” her voice trails off as she reflects on the pain of losing a child. “Many times I took him to the clinic and I was sent home with Panado, the staff said he just had a fever.

Rumbu’s experience of the in-hospital treatment at Frere has not been good, her child developed foot sores from a surgical band while being treated in the ICU.

“At Red Cross hospital they check the children every hour.

“The services in the Eastern Cape are very poor and are not the same as in the Western Cape. Everything is different.”

Rumbu says that children in the Western Cape with CHD receive a grant from their first month after birth, whereas in the Eastern Cape, the grant only kicks in after a year.

Mother’s Journey From Mourning to Joy